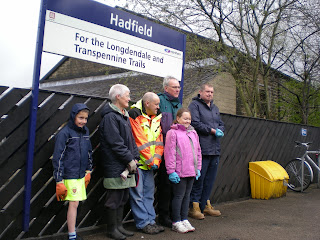 Sunday 22nd April was our second assembly on the station platform and as you can see from the photo we added more friends so grew in number to seven, including myself behind camera.  From left to right we have Jake, Joy Hallsworth, Darren, Jake's sister Kayleigh, Eric and Andrew Fidler. Not quite so warm as two weeks prior but at least not raining, so on to the first job. 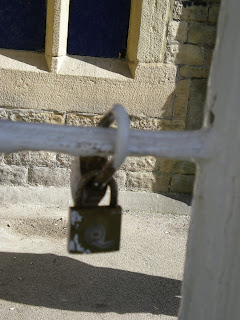 At our initial note taking session, this minor irritation but an irritation nonetheless was one that was spotted by everyone, unsurprisingly, as it hangs at eye level at a very prominent vantage point on the platform.

Darren promised to bring his hacksaw next time to make this quick gain, which was duly implemented and can be notched down as the first job done and dusted.

The rusty old lock which has been hanging there gathering even more rust for donkeys years, is no more.

The next thing to mention is litter.  Now the station as a whole doesn't suffer too badly from this slovenly practice, certainly not compared to some others and there are two litter bins on the platform which are well used. Notably however, there is no bin at all at the ticket office end of the platform or on the station approach, something that we feel needs rectifying..

There are also several areas that are an exception to what has been stated above and which can only be described as very messy or unsightly.

I'll focus on just one of these areas for now to illustrate.  Without zooming in nothing obvious here:- 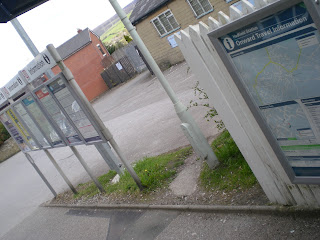 So let's zoom in at ground level to the foot of the metal posts:- 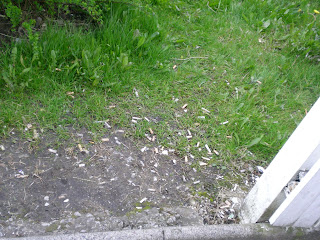 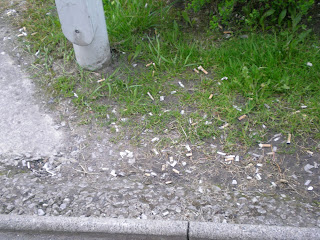 Clearly what's happening here is that because smoking on the platform is no longer allowed, people are putting out their dimps like dutiful citizens before entering the station but as no tray has been provided to stub them out, they are being discarded by their hundreds on the station approach.

Horrible and unsightly but preventable by the introduction of a tin/tray/stubbing device, the sort which you see outside pubs these days, preferably sooner rather than later or this one will run and run.

Still, we've highlighted one problem and have a cheap solution for it, so we'll call that a blog and  I'll finish the litter issue in the next post.

Steve
Posted by concreteblondy at 18:12