The evening of Friday 7th December 2012 was the first ever Xmas event of any significance that I can ever recall in the village.  Inside Hadfield Hall (pictured above) were various craft stalls along with a FOHS stall where we were giving away books, raising funds through donations, hoping to meet future members and selling for the very first time our brand new Friends of Hadfield Station mugs. A full blogpost along with a picture of the mugs will follow soon. By the end of the event we had sold 15 which was a fair start.

Here's a picture of Jeff Mann, keeping warm indoors, under the pretence of manning the stall (pun intended). 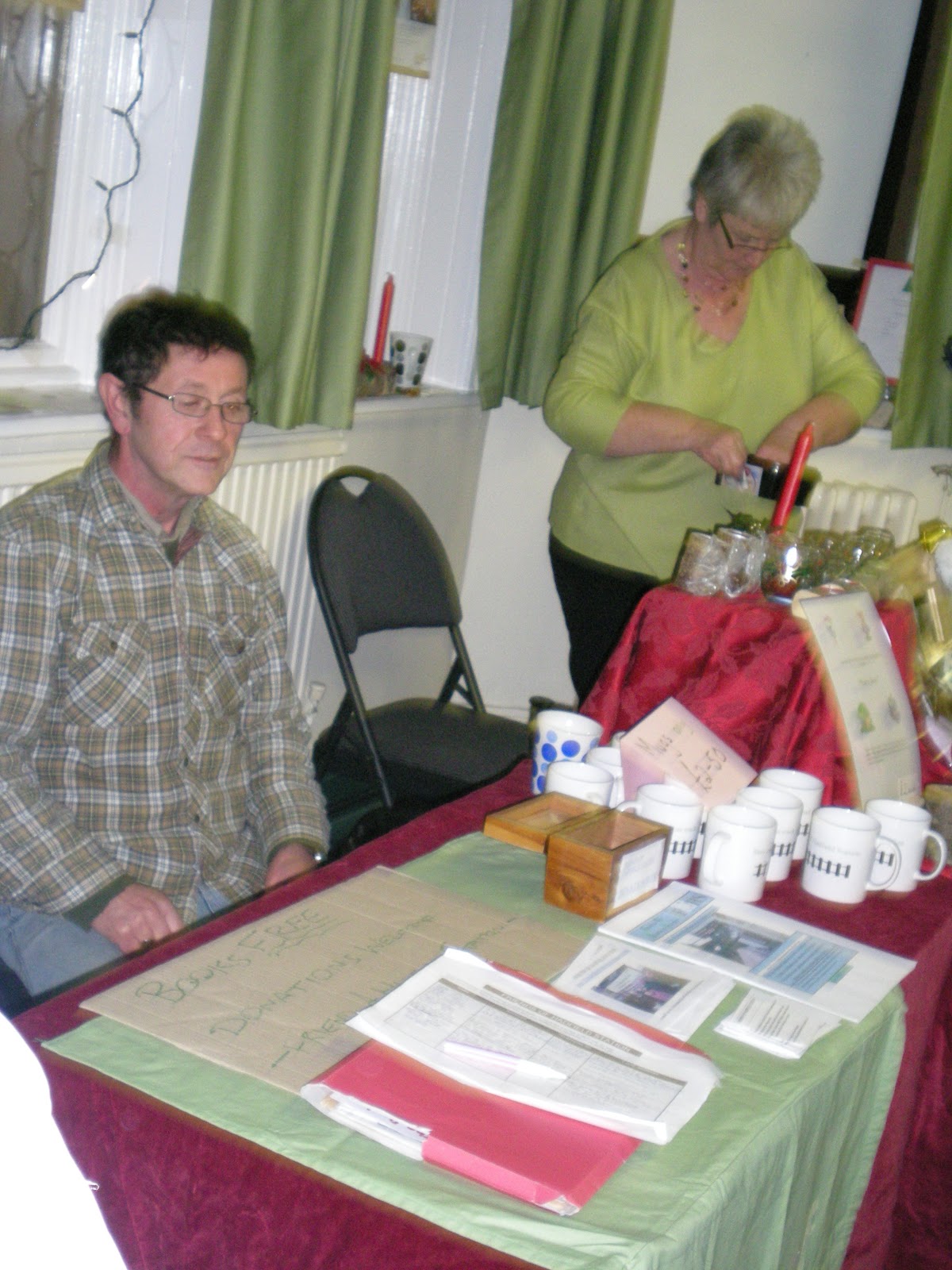 The idea of the inaugural Christmas Market was to build on the success of the opening of the Hadfield Heritage Trail earlier in the year (featured in a previous blog) and the hope is to make it a regular feature of the village calendar. Many of the organisers had also been involved in the Heritage Trail campaign, including our very own Joy Hallsworth who is also Chair of FOHS.

It was a chilly but calm and more importantly, a  rain free evening (following 48 hours of deluge, not to mention an entire years worth of the wet stuff).  Outside of the cosy hall there was entertainment in the form of a five piece jazz ensemble which provided a pleasant backdrop to the evenings events.. 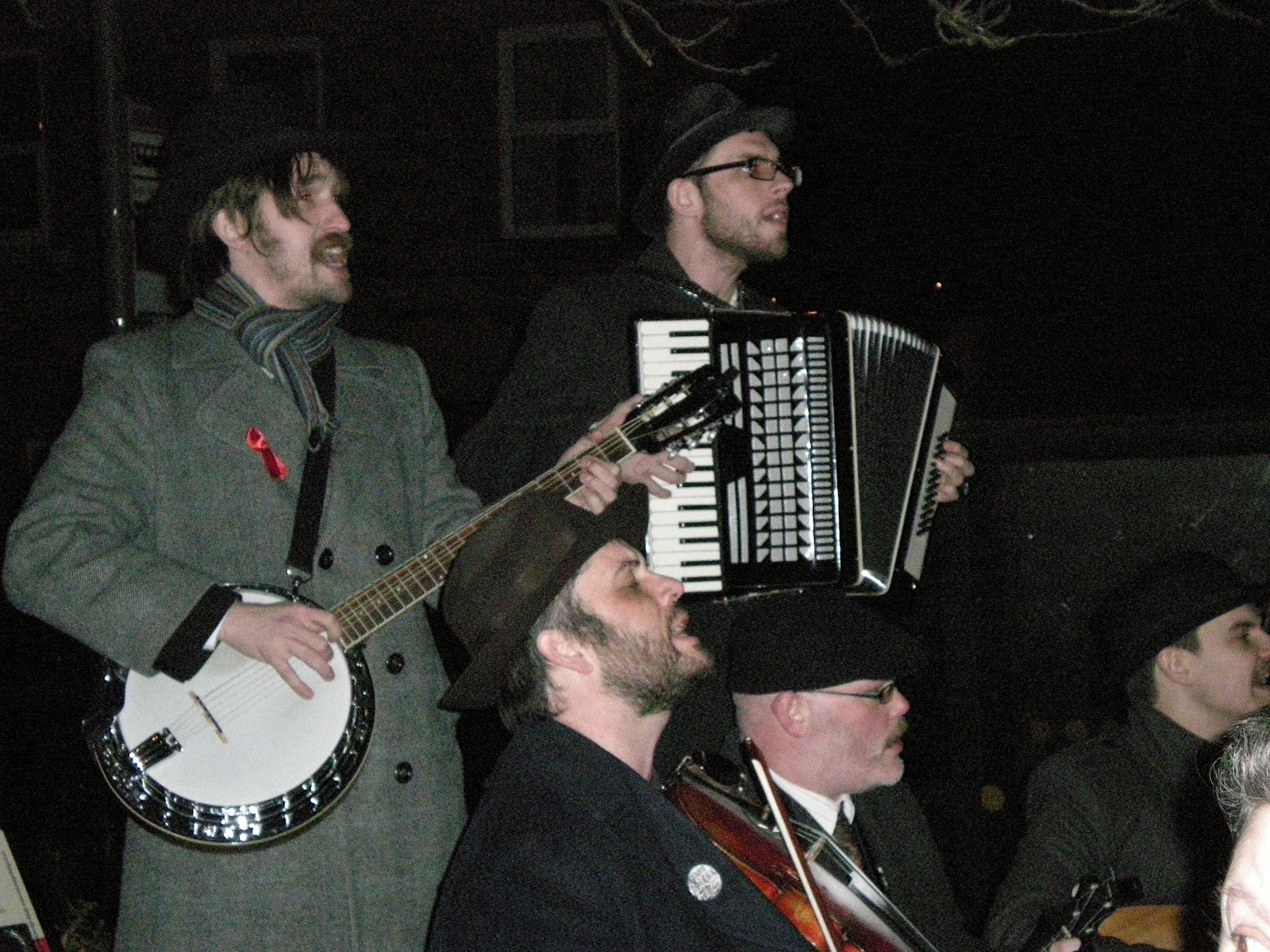 The main fayre was the Lantern Parade which was well attended and which took a circular walk from the Hall, up Station Road, past the Anchor, down Kiln Lane and back up Station Road to the Hall.  Preparation had been the key with workshops having taken place in the weeks prior to the event both in the village schools and at Hadfield Hall itself, where instruction had been given on how to make your own lantern, some of which are pictured below.. I seem to recognise that face in the crowd as Paul Bennett, son of former Labour Cllr. Ralph though please correct me if I'm wrong. 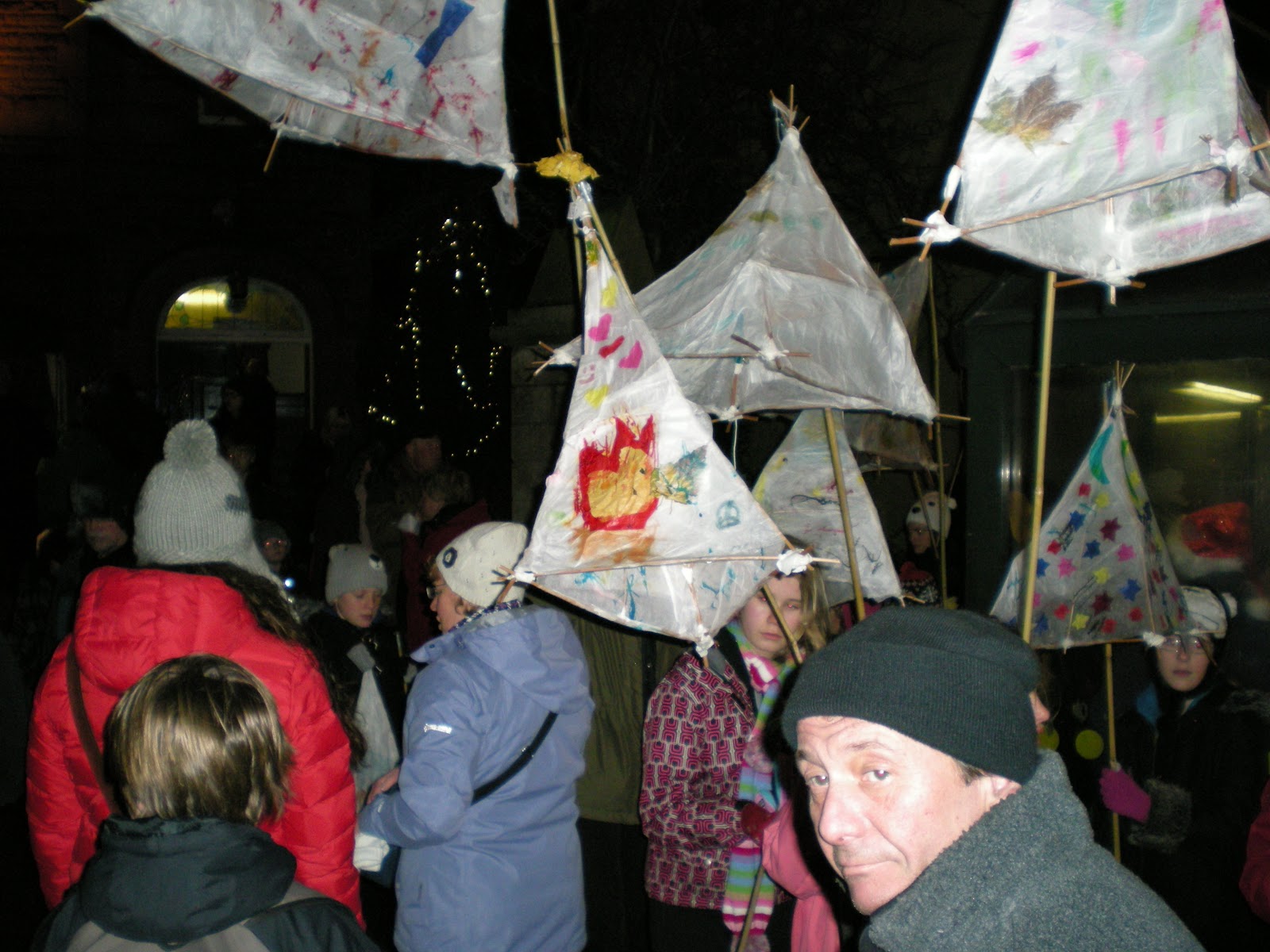 The event passed off successfully and it was nice for something to happen in the village at Christmas time for once.  Let's hope it does happen more than the once though and that it truly becomes an annual event that yougsters and their parents can look forward to.

FOHS acheived their aim on the night, which was to raise a little money, locate a few interested bodies and just to be there to help make ourselves known in the community. Perhaps one year soon we will be able to host the event in the station yard opposite the Hall, weather permitting - of course.  Events are made or broken by it (re: Hadfield Carnival) but thankfully this year fortune favoured the brave organisers who briefly lit up the village and a fair number of young faces.
Posted by concreteblondy at 15:18 No comments:

Presentation of FOHS first ever cheque 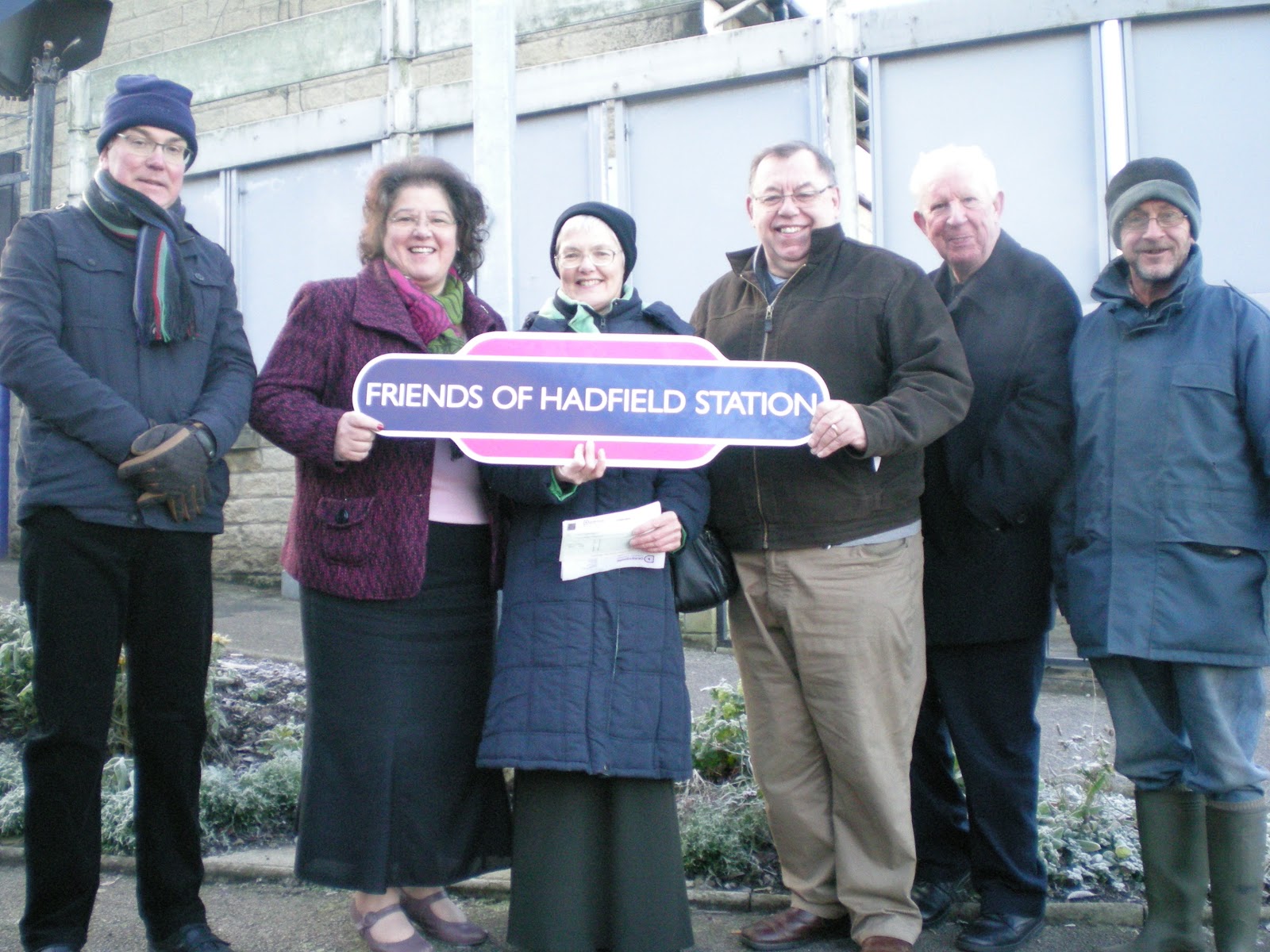 Sunday 2nd December saw the presentation to FOHS of a cheque for £200 from councillors George and Jean Wharmby. They have been long standing supporters of community railway groups and have in particular followed the fortunes of Friends of Glossop Station and lent them a helping hand along the way.  The source of the funding is Derbyshire County council's Community Leadership Fund, a scheme to provide small grants to community, voluntary, youth and other local organisations.  Its aim is to support worthwhile projects and initiatives that will benefit local communities.

Jean is the Chair of the High Peak and Hope Valley Community Rail Partnership which is a consortium of local authorities and transport providers including  Derbyshire County Council, Northern Rail, Transport for Greater Manchester, The Peak District National Park Authority and Cheshire East Council, along with community groups which share the common aims of promoting and enhancing rail transport services in the Hope Valley and High Peak areas of Derbyshire.  The Partnership is hosted by Derbyshire County Council.  Much of the area it covers area lies within the Peak District National Park.

This is the first cheque that FOHS has banked in its brief history, though another is in the pipeline. We are greatly indebted and thankful both to former councillor Peter Kay (second from right above) and to serving councillor Dave Wilcox, both of whom made the group aware of the available funding and of course to Jean and George for helping us to access some much needed cash that will help us in our work of enhancing the environment of the station..
Posted by concreteblondy at 14:59 No comments:

Hi to all our Friends, supporters and well wishers,

Just a quick line to let the world know that we are truly up and running, to the extent that we will be holding the inaugural meeting of Friends of Hadfield Station on Wednesday 25th July at 7.45pm in the upstairs room at Hadfield Hall.

Please use the Railway St entrance. The main agenda items will be the adoption of a constitution and the election of officers.

Come along if you are interested in the work of the group and might like to help in some way or if you just want to find out a little more about the work that we do and please tell anyone you know who you think might be interested.

I look forward to seeing you on the night.

In the meantime here is some light reading material for everyone - please find below an article from the current issue of Glossop Life where there is a piece about us in the communities section. You will need to use magnificaton to read the detail in the print.

CLICK ON IMAGE TO ENLARGE (then use your zoom to read)

Posted by concreteblondy at 01:10 No comments:

Planting the Station Approach in June 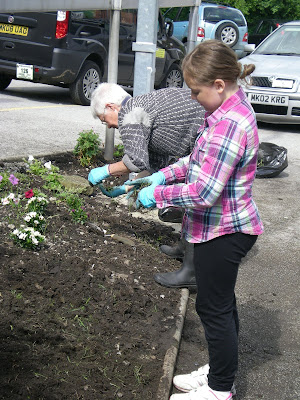 In the recent June Sundays, we have met each week (except for the one where we got well and truly rained off) and have continued to dig and plant the grassed/weeded/littered area on the approach to the ticket office.

The area was best characterised by cigarette butts and unkempt foliage that was a refuse for small items of discarded rubbish and was generally speaking, a bit of a mess, dull, drab and certainly not very pretty. If you view this previous blogpost, you can see pictures of what it was like, just a couple of months ago.

Here are a few snaps of the Friends taking action over the past month to improve matters:- 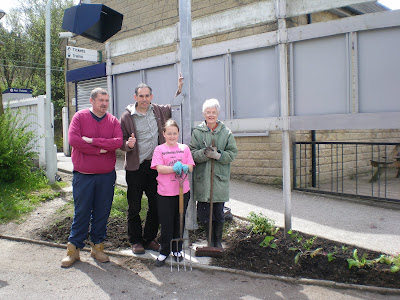 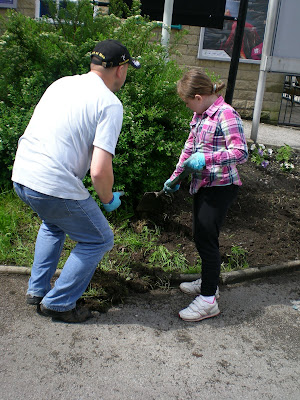 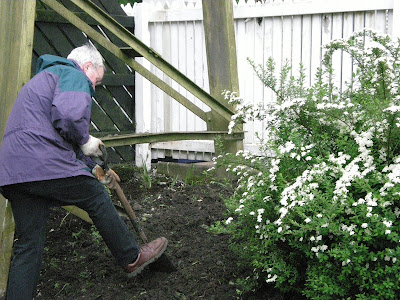 So following many weeks of dedicated digging, planting and weeding, along with a weekly clearance of fresh litter and butts, it feels like we have got on top of this particular corner of the station and that the bulk of the work for this project is now behind us.

Today we have another small area ready for planting, so hopefully very soon I will be able to publish some snaps of the finished article before we move on to our next area of improvement.
Posted by concreteblondy at 01:04 No comments:

Opening of the Heritage Trail - Sunday 27th May 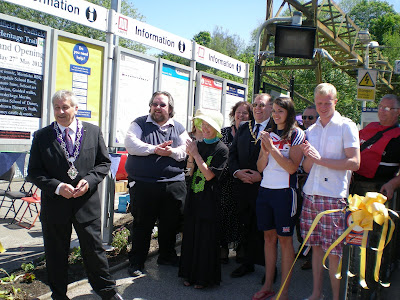 I'm fully aware that the blog is a few posts behind but hopefully that will be rectified soon. Sunday 27th May saw the opening of the Heritage Trail in the station yard, which meant that we were unable to do any of our regular work that day. However, we did have a stall at the event, our very first public outing, at which we were simply looking for new contacts that might be interested in joining the FOHS group and also fundraising.

Happy to report that we had success with both. Members of the public made donations for old books that I had sourced or just made a donation anyhow because they were just glad we existed and from that we made £32.15p - our very first source of income. We also made about half a dozen new contacts whom we will be inviting to an inaugural meeting in the near future, as one of the next things we must do is set up a formal structure with Chair, Treasurer, Secretary etc. 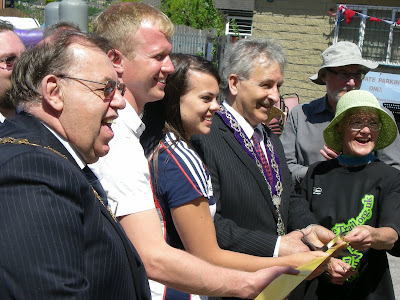 The top picture shows the official opening with local dignitaries and celebrities all posing for me whilst I took my best shot! From left to right they are the High Peak Deputy Mayor Tony Kemp, Cllr. Anthony McKeown, our very own Joy Hallsworth who is also chair of the Hadfield & Padfield Heritage group, Derbyshire County Council leader George Wharmby and his wife Cllr. Jean Wharmby, Olympic hopeful Katie Byres and Apprentice contestant Adam Corbally.

From that information you can work out the line up in the second photo, except for the man in the sun hat who I recognise as local heritage historian and neighbour Roger Hargreaves.

Actually the main point of taking the photo was for you to view the foliage behind the Deputy Mayor. Only weeks before, that area had been mainly cigarette butts, bits of broken glass and weeds. In an unforseen way therefore, the work put in during recent weeks has created a much better backdrop for quite a major event in Hadfields recent history. Glad to play our part.
Posted by concreteblondy at 01:16 No comments:

This coming Sunday 27th May will witness our first ever public appearance, at the Grand Opening of the Hadfield & Padfield Heritage Trail, which fortuitously for us is in the station yard, more commonly known as the Hadfield station car park these days!

Double click to enlarge the poster below for full details on what's on at the event.

Suffice to say that it runs from midday until 4.00pm with a ribbon cutting ceremony scheduled for 1.00pm. It has been reported in the local press that Glossop's 'Apprentice' star Adam Corbally and Hadfield's very own Olympic pole vaulting hopeful Katie Byres will be helping at the official ceremony on Sunday. 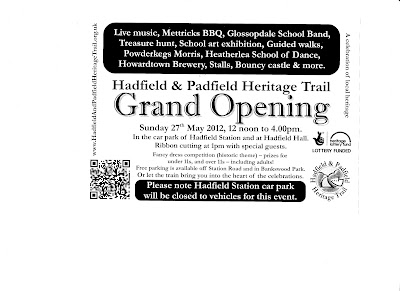 Hopefully one or two of you readers out there will come along and find out about what we're about and what we hope to do. Who knows some of you might even decide to join us in our quest to improve and enhance your local railway station. See you there.
Posted by concreteblondy at 11:59 No comments: 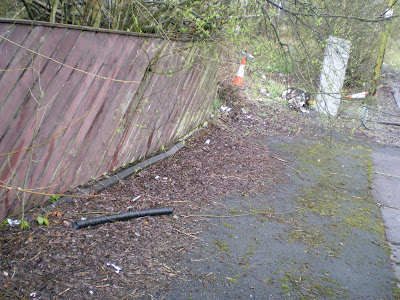 At first glance nothing too disastrous here. Some leaves to be swept up, overhanging branches to trim, rubber tubing lying around and a fence that could do with some protection from the elements. Let's walk down to the end of the platform though and we see a different picture... 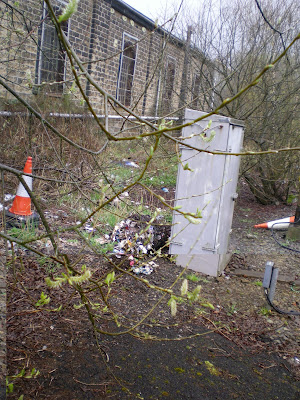 Here's a close up of the same:- 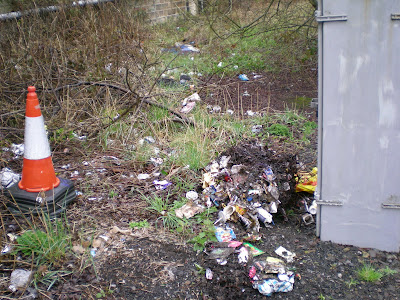 Naturally we felt the urge to deal with this fine mess as a matter of urgency and quickly set to work filling several bags of rubbish, which Eric willingly disposed of at the local tip. The same morning we trimmed the trees back and swept up the leaves and debris and have made a good start at improving this far top end of the station.

Pictorial evidence of the improved environment will follow in a post very soon, when I will round up some of the work we have been carrying out over the past few weeks.

And that folks concludes our tour of the worst grotspots on the station. From here on in, things get a little more savoury.

Bye for now but don't forget that if you want to follow the progress of the FOHS group, just type your e-mail address into the long bar across the top of the blog and new posts will go straight into your inbox.
Posted by concreteblondy at 12:04 No comments: